jQuery 1.4.2 is now out! This is the second minor release on top of jQuery 1.4, fixing some outstanding bugs from the 1.4 release and landing some nice improvements.

I would like to thank the following people that provided patches for this release: Ben Alman, Justin Meyer, Neeraj Singh, and Noah Sloan.

As usual, we provide two copies of jQuery, one minified (we now use the Google Closure Compiler as the default minifier) and one uncompressed (for debugging or reading).

You can feel free to include the above URLs directly into your site and you will get the full performance benefits of a quickly-loading jQuery.

Additionally you can also load the URLs directly from either Google or Microsoft’s CDNs:

A full list of the API changes can be found in the 1.4.2 category on the jQuery API site.

In this release we’ve added two new methods: .delegate() and .undelegate(). These methods serve as complements to the existing .live() and .die() methods in jQuery. They simplify the process of watching for specific events from a certain root within the document.

This is equivalent to the following code written using .live():

Additionally, .live() is roughly equivalent to the following .delegate() code.

There has been some large code rewrites within this release, both for performance and for fixing long-standing issues.

As is the case with virtually every release of jQuery: We’ve worked hard to continue to improve the performance of the code base, making sure that you’re provided with the best performing JavaScript code possible. 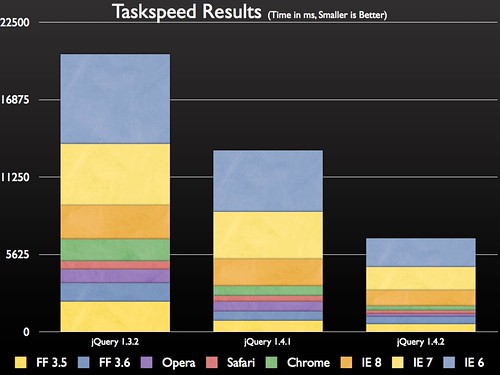 Specifically we’ve improved the performance of 4 areas within jQuery:

While comprehensive benchmarks like Taskspeed can be interesting if deconstructed into individual sub-tests for further study, as a project we tend to stay away from using them as an accurate measure of true, overall, library performance. Considering how many aspects make up a library, not to mention the different techniques that they offer, cumulative results rarely reflect how an actual user may use a library.

For example, we saw significant overall performance speed-ups in Taskspeed simply by optimizing the $("body") selector because it’s called hundreds of times within the tests. Additionally we saw large gains by optimizing .bind() and .unbind() by a fraction of a millisecond – an inconsequential amount – especially considering that any cases where you would bind hundreds of events you would likely want to use .live() or .delegate() instead.

We’ve collected some results from the other major libraries as well but are less interested in those results and far more interested in the performance improvements that we’ve made relative to older versions of jQuery itself.

We will continue to work on optimizing the jQuery code base – indefinitely. It’s always a major concern for us to try and provide the fastest JavaScript/DOM-development experience possible. And yes, there will likely always be ways to gain additional performance – either through internal optimizations or by pushing critical functionality off into browser-land for standardization.

The largest internal changes have come through a much-needed structural rewrite of the events module. Many quirky issues related to event binding have been resolved with these fixes.

Namely event handlers are no longer stored as object properties in jQuery’s internal object store (with metadata attached to the handlers). Instead they’re now stored within an internal array of objects.

If you’ve ever had the opportunity to play around with .data("events") on a jQuery element you would find that it returns an object with all the event types currently bound, within it.

To enumerate some of the changes that have occurred during this rewrite:

As a side-effect of these changes we had to change the newly-exposed special add/special remove APIs in order to accommodate the new event data objects. Ben Alman is in the process of writing up a large tutorial on jQuery’s special event system and we will be making additional announcements when that occurs.

There were a total of 40 tickets closed in this minor release. Some relating to differences between jQuery 1.3.2 and jQuery 1.4.x, some fixing long-standing issues (like in the case of the event module rewrite).